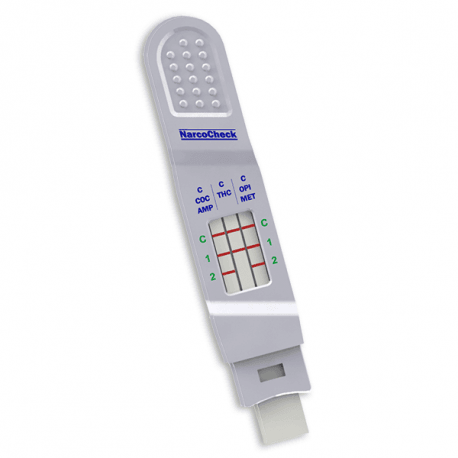 Private individuals:
you can buy online from our drug tests retail shop.

Professionals:
you can ask a quotation using our contact form or call us

This test is made for the screening in human saliva of the currently 5 most used drugs of abuse.

Each substance is detected independently.

Therefore, the test gives a result drug by drug.

This test is a qualitative assay (type "NO / YES"), and thus delivers a "NEGATIVE" or "POSITIVE" result.

The detection of cannabis has never been so efficient!

This saliva test detects the Δ9-THC, which is the molecule of cannabis that can be found specifically in the mouth. The smoke of a marijuana cigarette is full of this molecule. This smoke will contaminate the oral cavity during smoking a joint, and it leaves a trail for several hours. Note: this test detects the same marijuana salivary traces as those sought in the screening carried out at the roadside by the police forces. So this is a true innovation in testing saliva, and not a simple modified urine test.

Cut-off : each substance is screened at a specific cut-off.

Detection time of THC in saliva : whatever the test used, THC (the active ingredient in cannabis) can never be detected more than 4 to 6 hours in saliva. The extremely low detection level of the NarcoCheck saliva test allows to fully exploit this window of time. The detection time of our test will therefore be 4 to 6 hours after the last joint smoked, regardless of the level of consumption.

Detection time of the other drugs : cocaine, heroin, amphetamines and ecstasy can be detected by this test over a period of 24 to 48 hours after the last use. This time may vary according to each person's metabolism, as well as the quantity and quality of the drug that was consumed.

1- Place the absorbing pad in mouth and salivate on it for few seconds.

3- Read the results after 10 minutes. 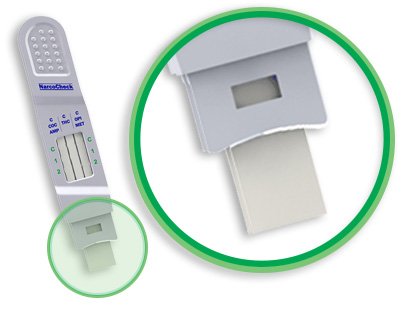 The test consists of 3 test strips, each detecting 1 to 2 drugs.
On each strip a red line will be displayed (or not) in position 1 and 2.

C = control lines; they must always be present otherwise the test is invalid.

When a red line appears next to a drug, the test is negative for that drug.

if no line appears next to a drug, the test is positive for that drug.

What is the difference between Δ9-THC and THC-COOH?

Δ9-THC (say "delta 9 THC"), is the apellation of the cannabis molecule in its raw state, which is the pure cannabis substance as found in the grass (marijuana) and cannabis resin (hashish).

THC-COOH (also called 11-nor-Δ9-THC-COOH) is the molecule of cannabis that has been converted by the body (the "metabolite" of cannabis). The human body must indeed change the Δ9-THC in order to eliminate it. The result of this transformation is THC-COOH, found particularly in large quantities in the urine.

Why is it important to evaluate the performance of a saliva test?

Because the only molecule present in the mouth after smoking a joint is the Δ9-THC, not THC-COOH. But many saliva tests on the market are still designed on the basis of modified urine tests, that track mainly THC-COOH and not the Δ9-THC. These tests are completely ineffective. Only tests that target the Δ9-THC molecule can acheive to detect successfully marijuana use, and the more the cut-off is low, the more the test will be effective.

To effectively detect cannabis, a saliva test must therefore be calibrated to detect Δ9-THC.

Can a saliva test replace a urine test?

No, because these two types of tests do not answer to the same question.

Urine tests allows for a background screening, which detects drug use over a period of several days or even weeks for cannabis.
They answer the question: "does this person use drugs ?"

Saliva tests enables a screening on a very short detection time period. They are designed to tell if someone has recently used a drug, but not whether that person use drugs more or less regularly.
They answer the question: "have this person smoked marijuana during the last 4-6 hours, or used any other drug during the last 24h ?"

It is for this reason that the saliva test is increasingly used by companies seeking to reduce the risk of accidents caused by drug use. Indeed, the goal is not to know if someone had a joint the night before, but if that person has been smoking on the workplace or during a break, which represents a clear danger to the security of an employee, his colleagues and the public.